The Future of Live Football 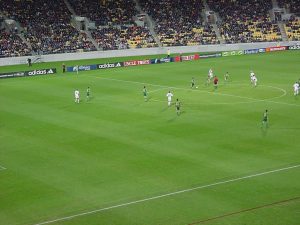 If you want to watch England in this Saturday’s World Cup qualifier against Ukraine you have three choices — travel to Dnipropetrovsk or watch it live on the internet or at a cinema.

Setanta would have been showing the match on TV if the company had not ceased trading in June 2009. A press release from digital media company Perform explains how they became involved in the deal.

“The international football agency Kentaro, acquired the broadcast rights from the Ukrainian FA and had sold the game to Setanta in December 2007. However, the pay-TV broadcaster went into administration over the summer leaving this key match without a UK broadcaster.

With no offers on the table from UK free to air or pay-TV broadcasters Kentaro decided to seek the widest possible online audience, appointing digital sports specialist Perform, to market and stream the match online, on a pay-per-view basis.”

Being able to watch live sport online is not a new concept, however, this historic, yet contentious broadcast, is the first time that an England match has been broadcast exclusively on the internet and probably the first time there has been live football in cinemas too.

“Over 20 Million people in the UK regularly use the internet to watch sport.”
Philipp Grothe, CEO of the Kentaro Group

Not everyone has a computer, not everyone has broadband and even if these two prerequisites are met the inconvenience and quality will have put people off watching the game. 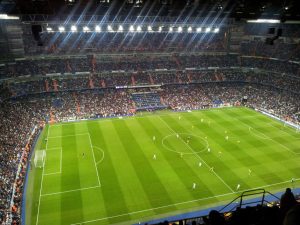 Watching any form of live streaming online has its limitations; whether it be computer processing power, broadband speed or screen size. While the limitations and cost may be a contributing factor to the anger that has arisen since the announcement of the ‘internet only’ fixture it seems to be just the fact that the match is not on the telly that has enraged.

A poll on the BBC website asked, “will you pay to watch England’s game against Ukraine online?” Over 16,000 people voted and a huge 97% said ‘NO’.

I think the Beeb asked the wrong question. They should have omitted ‘pay to’ and then followed it up with a second poll for those that said ‘NO’ which asked why they would not watch the match online. I’m sure that the cost would not be the main reason for all 97% naysayers were choosing not watch online and that a majority would have chosen their principles over their pride for English football, as if television broadcasters owe them the right to see England’s far-flung fixtures.

Alternatively, there will be a lot of people that simply would not have watched the match anyway, even if it were on television. England have already qualified for the 2010 World Cup in South Africa and a match against Ukraine, to some at least, may not be such an attractive fixture to sit down and watch for a couple of hours.

However, if you do want to see England play the main inconvenience is having to watch the match on a computer screen which tends to be relatively small when compared to our televsions — unless you have a 30″ monitor. However, you might be able to hook your computer up to your television, obviously more practical if you have a laptop but finding an appropriate cable will add to the cost of watching the game.

The expectation of watching something online is that it will be low quality — jittery and pixelated picture with low–fi sound. Who wants to pay for a low-quality broadcast? Such expectations may have been formed after seeing a video on websites such as YouTube where a lot of the user-generated video is of a low quality. The reality will differ from household to household — depending on your computer and the actual speed of the broadband connection being used. (Dial-up users need not apply.) Nonetheless, the quality will be compared to that of television and such live streams, for the near future at least, will be of a lesser quality.

The football match is being provided at three different bitrates, the higher the bitrate the higher the quality. In theory, anyone who has broadband will be able to view the highest quality video stream but will demand cripple supply? That is unlikely as Perform are used to serving live sport to the masses, although this match has the potential to give them their biggest audience ever.

Some countries will be prohibited from viewing the match online (as is the norm with any broadcasting rights). This particular broadcast does have one ironic prohibition as one of the countries not able to view the live stream is Ukraine.